Canada to receive 6.5 million Covid-19 vaccines by end of March

Traveling to Greece during Covid-19: What you need to know before you go

Swedish YouTuber and comedian PewDiePie revealed his transformation in an Instagram post that has been ‘liked’ nearly 4 million times on the platform.

Pouring himself a drink as the new year kicked in, Felix Arvid Ulf Kjellberg aka PewDiePie back in January bid goodbye to his “bro army” saying: “I want to say thank you for watching my videos, it makes me happy. Cheers to you.”

The popular Swede YouTuber did come back after a brief hiatus from the video-sharing platform but the shot of whisky may not appear as much on his channel.


PewDiePie, arguably one of the most popular content creators on YouTube, has in the past decade donned several avatars. Gaining popularly for his commentary while playing video games, the YouTuber turned into a meme-reviewer, a satirist news anchor and a dad to 9-year-olds of the world.

What many watching him didn’t know was perhaps he was working out when the camera was not recording.

Seeings PewDiePie’s toned body and abs, his loyal fanbase was impressed, to put it mildly. 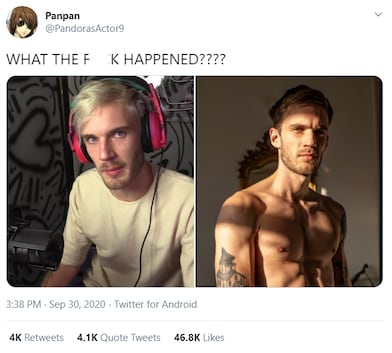 “How did PewDiePie get so ripped?” was a question that arose on the minds of 3.7 million fans who liked his Instagram post. Revealing his diet plan during a live stream earlier this year, PewDiePie said:

“I don’t push myself much with it so honestly, I don’t know,” before adding, “I quit drinking which really, really helped I think. There’s so much calories in whisky I think. I started eating a lot of proteins.” He further said that introducing proteins in his diet helped me stop snacking on chips, popcorn and junk food.

“Once you start working out, it changes your mentality to food. If you go without a certain food that you thought was so important like cakes or hamburgers or fast food.”

It was liberating to have junk food off the table, PewDiePie revealed.

“If you go without it for a longer period of time, the craving to have it disappears completely. And you feel liberated. It’s tough in the beginning, but once it has gone from your diet, you don’t care about it anymore.”

His rescue at a London protest inspired Michelle Obama and Prince Harry. Now, Patrick Hutchinson is turning his moment into a movement

Last summer, when he rescued a man at a London protest that had turned violent, …