Could post-vaccine life mean we return to normal? Not just yet

Former Russia oil tycoon: I was one of the lucky ones – CNN Video

Pandemic changed a lot of things–homes became offices, secluded corners became workspaces, we stayed home for the longest, juggled between household chores and office work, travel was cancelled for at least few months. There has been job loss and economic crisis too.

But have you thought about burglars? What are they doing in the pandemic now that all of us are home round the clock? That is exactly what this spoof video tries to address. It begins with two burglars speaking on how nobody is talking about the loss they have faced in the pandemic, now that we all are home.

They complain that they tried raiding the vacation homes on city outskirts to loot. However, they ran into people there too. The two-minute-long video also shows a video meeting between the members of ‘burglar community’ who rue on how tough the times have been. “I ave been doing this for 40 years and now I am taking classes at the community college,” says on member.

The members say that they have now resorted to ‘porch pirating’, i.e, lifting items from the porches delivered from online shops. However, even that has been a useless exercise as most of the items that they lift are of no use to them. These burglars call themselves Robin Hoods, who steal from the rich and give to the poor; the poor being themselves in this case.

The video, uploaded on a Facebook page, is a hit among the people on Internet. They are loving the creativity of the duo, even though some people are suggesting to loot offices since homes are populated at all times! 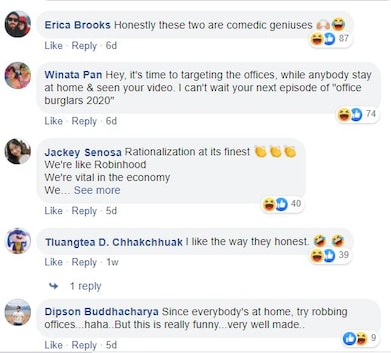 While the video takes a humorous take on Work from Home, the world has completed six months of shifting the workplace to homes. Six months into the “new normal” and whatever semblance of work-life balance you had before the pandemic is now gone.

Your hours are longer, your meetings always occur at lunch time and you definitely never ‘log out’ at the time you used to leave your office building. But it’s not just in your head, or you alone. A Harvard Business Study confirms what many work-from-home employees already know: We’re swamped.

The study, which was conducted on over 3 million people in 16 global cities found that the average workday increased by 8.2 percent—or 48.5 minutes—during the pandemic’s early weeks. Employees also participated in more meetings, though for less time than they did before COVID-19 sent many workers home.

Previous Joe Biden Plays Despacito at Election Rally in Florida to Catch with the Mood of Hispanic Voters
Next ‘There is No Tomorrow’: Three Urban Millennials Share What Job and Health Crisis Are Doing to Them

TikTok is laying off employees in India as ban becomes permanent