It seems like we often forget amid the buzz that celebrities too, deserve the privacy and space following an otherwise embarrassment.

Avengers Captain America star Chris Evans came under trolling and attack on social media after he accidentally displayed a close shot of a penis on his social media. Since then, the Hollywood actor became the topic of discussion on Twitter with Google Trend showing a spike in searches that are otherwise utterly abhorrent.

The 39-year-old actor shared a short video on his Instagram on Saturday of himself and some friends playing Heads Up. But at the end of the video, a shot of the actor’s phone camera roll came up, which featured a close-up photo of a penis. The picture was cropped too closely to be identified further. 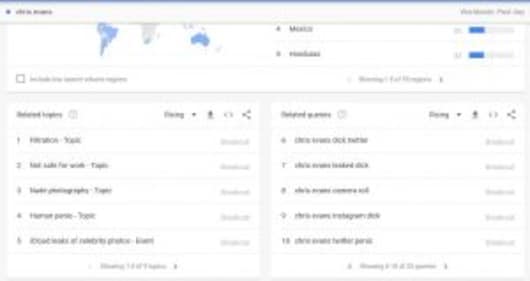 The incident that was quite unexpected seems to have made netziens too curious, curious beyond the boundaries of someone’s privacy. A renowned actor of international fame, who is a multiple-time holder of People’s Choice Awards for his role of Captain America, has suddenly been reduced to a Google search of ‘dick’, ‘nude’ and ‘penis’. Social media soon flooded with jokes and memes about the actor’s genitals and memes. All of it should remind us: Mental health is not a joke and it’s quite mortifying to see one’s nudes leaked and people unable to hold back from latching on to it.

While news headlines poured in, inciting further interest in readers with how ‘Chris Evans has left social media scandalised’ with his accidental nude snap, we often forget amid the buzz that celebrities too, deserve the privacy and space following an otherwise embarrassment.

However, amid the trending ‘dick pictures’, many netizens and fans voiced out how the actor, who gifted the world such hit films, do not deserve this unscrupulous treatment. Many even rightly reminded others that the actor has been reported to suffer from anxiety, panic attacks and before social media makes the situation worse for him, they better take a step back on their curiosity.

Before sharing Chris Evans nude, remember that the actor suffered an anxiety disorder with the rise of his Hollywood career and even refused to be Captain America on several occasions for fear that fame would affect him and his family.#ChrisEvans pic.twitter.com/J6PeEDAJYJ

Chris Evans has done so many wonderful and kind things for our community. Today he mistakenly posted a personal image for a brief moment before taking it down. Chris has struggled with depression and panic attacks. Please respect him and his family delete that photo. #ChrisEvans pic.twitter.com/fRiXi46Dfy

imagine how mortifying it would be to have your fucking nudes leaked and you’re all spreading it like wildfire. He’s probably anxious enough as it is andeveryone is completely disrespecting him. Mental health is not a joke, have a bit of respect for his privacy. #chrisevans pic.twitter.com/nov8j4LYAi

On the work front, Chris has recently announced his upcoming collaboration with Avengers director Russo Brothers. Chris and Ryan Gosling are going to team up for Netflix film The Gray Man, being made for a whopping budget of USD 200 million.

The Gray Man is based on the 2009 Mark Greaney novel of the same name and is about a freelance assassin and former CIA operative named Court Gentry (played by Ryan). The movie will follow Gentry as he is hunted across the world by Lloyd Hansen (Chris), a former member of Gentry’s CIA team.

Previous ‘The Broken Hearts Gallery’ director believes Selena Gomez’s breakups ‘enriched’ the collaboration
Next Ariana Grande, Lady Gaga were ‘cracking up’ while working on ‘Rain on Me’