Traveling to the Maldives during Covid-19: What you need to know before you go

Chetan Bhagat’s new book ‘One Arranged Murder’ is set for release and the writer decided to use the buzz created by the PUBG ban to promote it on Facebook.

Writer Chetan Bhagat is the news once again ahead of the release of his new book. And much like several food delivery apps and other Indian brands, the writer also seems to be capitalizing on the recent PUBG ban by the Indian government.

Bhagat announced his upcoming book ‘One Arranged Murder’ when he unveiled the book’s cover earlier in the year. On Thursday, the ‘Five Point Someone’ and ‘Half Girlfriend’ writer took to social media to share a PUBG meme to promote his new book.


READ: Chicken Dinner and ‘SUBG’: Indian Food Apps are Making the Most of PUBG Ban

Bhagat shared a poster on Facebook that claimed, “No more PUBG. But you can still read this book”.

“Someone gets killed in this one too #OneArrangedMurder,” he wrote by way of a cheeky caption.

One user called Sachin Kumar Gurjar asked a tough question, “Are you not committing a crime by luring youth into substandard reading?” Another by the name of Jaya Bharti Kujur expressed regret at Bhagat’s decision to make profits out of the PUBG ban which had left millions of fans of the multiplayer battle royale game in absolute grief. “Why you have to promote your book at the cost of downfall of something, people who read will read no matter the content is good bad or ugly,” they wrote.

A critic by the name of Jitu Changmai went as far as to say, “You are sounding more like a book peddler than an author which you aren’t in any case”. Hurt and disappointed PUBG fans and Indian gamers also slammed Bhagat for using their pain as fodder for marketing his book. “Ludo khel lenge lekin aapki kitaab nahin padhege”, (Will play Ludo instead but not read your book) one user said. 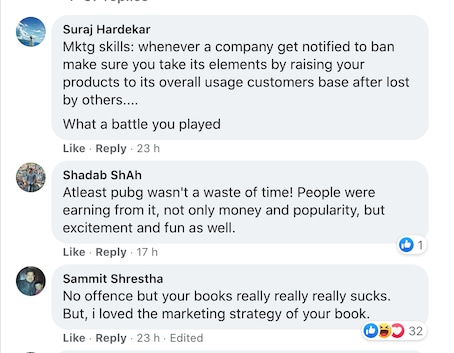 Bhagat who started his career in literature with books like ‘Five Point Someone’ and ‘One Night at the Call Centre’ seems to be moving away from his pet coming-of-age-IITian-saga genre spiked with liberal doses of ‘college-romance’ toward darker, more sinister themes. His last book, Girl in Room 105 was also a thriller and with ‘One Arranged Murder’, Bhagat seems to be willing to explore the genre further.

And in wake of the reactions to his recent Facebook post, Bhagat should leave the promotion part to the publishers and just focus on writing more books instead.

Previous Lili Reinhart recently denies ever feeling like a ‘prisoner’ on the sets of ‘Riverdale’
Next Austrian Man Breaks Record by Spending 2.5 Hours in Box Filled with More Than 200 Kg Ice Cubes

Bitcoin surges after Paypal jumps into the cryptocurrency business