Long Before Binod: Celebrating 25 Years of Internet in India With 25 Iconic Desi Memes

Videsh Sanchar Nigam Limited (VSNL) brought the World Wide Web to Indian households in 1995 on country’s Independence Day and 25 years later, the Internet has become a vital part of our lives.

If you ever wondered, this was the first-ever photo uploaded on a website using the Internet, all the way back in 1992. 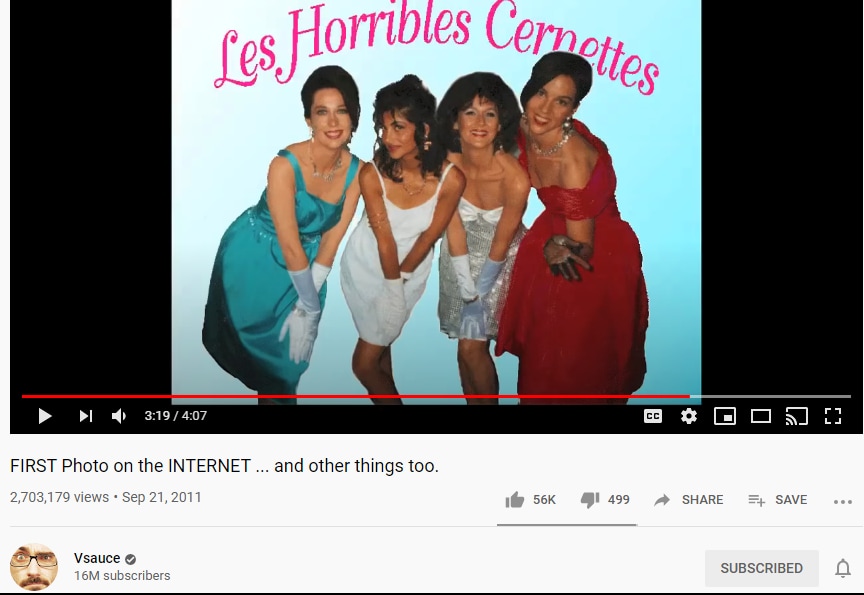 And do we have come a long way.

Take the ongoing coronavirus pandemic for instance. As the world stayed confined to their houses, the ability and flexibility to work from home kept certain businesses and companies from collapsing. Friends stayed in touch, lovers got hitched over video calls. The connectivity to the outside world also ensured that you were fed even as you weren’t allowed to venture out in lockdown.

The Internet has also paved the path for memes that have, over the years, become a cultural phenomenon to express a lot of feelings with a simple of use photo, gif or a video.

We have put together 25 desi memes that made our online stay even more worthwhile.

The Internet took flight with Vipin Sahu after his hilarious conversation with his paragliding guide had everyone’s attention.

(Strong language ahead. You’ve been warned!)

2. Pooja, What is This Behaviour?

You don’t tell me what to do! Model Pooja had appeared in Bigg Boss season 5 back in 2011. She was fierce, angry, and animated through the season. Somehow, desis came across her video snippet and rest is history. Also, SPARE ME!

The Internet unpacked its meme bag and made Vaibhav Vora aka “Mature Bag Guy” an overnight star after he uploaded a TikTok video explaining how to look attractive in college. According to him, one shouldn’t carry the same bag they carried to school while in college. They need to opt for a “mature bag” in order to look more attractive.

The cricket fans used his expression to perfection.

Printers were hacked, billboards were bought, some played ‘Bitch Lasagna’ on bass guitar for 10 hours, while others didn’t shut up about PewDiePie until people subscribed to the Swedish YouTuber. Hell, it even united enemies on YouTube. In the end, T-Series won the race and claimed the top spot.

Somvati Mahawar, a passionate vlogger on Vigo Video — an app that lets you create and share short videos across social networking sites, became India’s unofficial brand ambassador of chai when her 15-second video urging people to drink tea spread like wildfire on the Internet. Not just chai, Mahawar also offered watermelons, mangoes, and even paneer in her videos.

Priya Prakash Varrier became an overnight Internet star after a clip of her video from Malayalam film Oru Adaar Love‘s song ‘Manikya Malaraya Poovi’ was passed around like drugs on social media.

Taimur’s perfect airport look, Taimur getting a gym membership, Taimur posing for the paparazzi, cute baby Taimur enjoying Christmas, chubby-cheeked Taimur spending quality time with parents, Taimur going to school, Taimur meeting Elon Musk — in short, Taimur can do anything and photographers are obsessed with him. Not that we are complaining. Kareena Kapoor Khan and Saif Ali Khan’s kid Taimur Ali Khan became India’s favourite kid in 2018 and his fame hasn’t gone to his head.

The young Pataudi once again hit the news in 2020 after his parents Kareena Kapoor Khan and Saif Ali Khan announced the addition of new member in the family.

Kya aapne kabhi online hotel search kiya hai? This but 200 times a day. The “Trivago guy” was the talk of the town in 2017 thanks to his “un-model-like” appearance and annoyingly-addictive ad that people couldn’t stop watching. Abhinav Kumar, Trivago’s country development head (India), is a chill man in real life (@singhabhinav) and he loves all the memes made on him.

A young girl by the name ‘Dhinchak Pooja’ took cringe-pop a few notches up with her first single Swag wali topi that was released on YouTube in June 2016. The rest, as they say, is history. Since then, Pooja has blessed us with many gems and enjoyed immense fame including participating in a Bigg Boss season. Close second are Taher Shah and Vennu Mallesh but Pooja slays. Momin caught the cricket world’s attention with his comical yet heartbreaking meltdown after his ‘unpassionate’ Pakistan team let him and lost to India in 2019 Cricket World Cup and let his million countrymen and women down. His “burger pizza” rant on Pakistan team’s fitness outside the stadium earned a retweet from none other than BigB himself.

Iss desh mein ho rahe bhattachar ko mitaane ke liye hum aapko aage aana padega. These epic lines by Kanpur based comedian Shahid Alvi who played a news reporter at Ch*tiya News in the video was the only talking point in the Indian community for days and weeks. Again, if you are repulsed by strong language, we advise you to NOT watch the following video.

A video of a Pakistani woman (popularly known as Bh**wi Aunty) going on an abusive rant against the government went insanely viral on the Internet. Starting her answer by saying, “yeh bik gayi hai gormint (this Government has sold out),” the woman goes on to say, “saare milke humko pagal bana rahe hain (these people are driving us crazy),” and the expletives follow. Her video inspired memes, parodies, and even merchandise in India.

The nostalgia is strong with this one. 10 Rupee note scribbled with ‘Sonam Gupta Bewafa Hai (Sonam Gupta is unfaithful)’ by an apparent jilted lover had the country in tizzy.

Bollywood legend Amitabh Bachchan loves his social media followers and he isn’t subtle about it.

Bachchan, who has had several angry young man moments on Twitter over losing his followers decided to escalate matters and take his obsession offline.

The Bollywood star is pretty much in sync with the Internet culture and regularly uses Twitter and other platforms to share updates about his personal and professional lives with his fans and well-wishers.

But the dry spell in his following list has often left him very, very angry.

T 2793 – Dear Twitter Management , its quite amazing how you manage to keep numbers of followers CONSTANT, & not moving AT ALL despite maximum activity !!👏👏👏👏👏.. well done !! I mean how do you keep the score board from not moving despite every ball being hit for a 6 !! pic.twitter.com/oDZU9xxYAZ

Who would have thought? Internet did. Good folks on the web were convinced that Imtiaz Ali’s popular 2007 rom-com Jab We Met starred Kareena Kapoor and Irish actor Cillian Murphy and not Shahid Kapoor as Aditya in the lead.

Murphy, who has given noteworthy performances in gangster series Peaky Blinders and The Dark Knight trilogy made his Bollywood debut with Jab We Met, netizens said with “proof”.

The massively popular Chinese app TikTok was banned in 2020 citing security reasons. The app that has been a source of entertainment (and revenue) for many had to shut its shutters along with many apps following the India-China faceoff.

The event got so big, Swedish YouTuber PewDiePie reacted to TikTok memes by Indians.

On May 4, Teslaman Elon Musk along with his partner Grimes and surprised everyone the choice of the name which sounded like a Maths formula–X Æ A-12 Musk.

While unique names are not uncommon, being named what only appears to be a series of numbers and sings left people reacting the only way they can: with memes.

Eventually, the couple found their way around the California law to retain their baby boy’s name on papers. X Æ A-12 Musk became X AE A-XII Musk. The pronunciation remains the same, just that the Roman numerals helped them retain it.

“Abba Harmonium” is a brainchild of Pakistan’s massively popular satirical show Loose Talk. The funnyman Moeen Akhtar had appeared as a different character in each episode in the entirety of the show written and hosted by Anwer Maqsood.

Video of Ghana’s pallbearers, doing a cheerful dance with the coffin became the meme on the Internet.

The original video shot by BBC back in 2017 shows the ancient tradition of Ghana bidding goodbye to the departed with fervour and joy. Three years later, the pallbearers have become the messengers of bad news (read: death) dancing to the beats of ‘Astronomia’.

In fact, when the Supreme Leader of North Korea vanished mysteriously for a few weeks, the pallbearers were summoned.

Cops back in India, re-enacted the meme to send out the message of risk involved in stepping out during the pandemic.

Yep, netizens found a way to deal with the ongoing deadly pandemic by easing their worries through memes. Lockdown, which became an essential part of lifestyle for Indians and a necessary step to break the chain of coronavirus, became a topic of heavy discussion on social media. While cops actively spread awareness messages around COVID-19 with memes, Indians, confined to their homes, lifted their spirits by following a similar pattern.

Binod. Slayy Point, a famous YouTube channel run by Abhyudaya and Gautami recently went down the rabbit hole that is the Indian comments section in one of their videos and a meme was born.

Both Abhyudaya and Gautami gave us a glimpse of what really goes on in the “filthy” comments section of videos where the commenters leave behind stuff that will have you scratching your heads. From “thoko likes” to penning down out of context poetries, a lot goes on in the comments’ world.

Titled “Why Indian Comments Section is Garbage (BINOD),” one of the comments that stood out in their now-viral video was from a certain person Binod Tharu who simply wrote “Binod”. Was he marking his territory? Probably.

Just like this compilation, 2020 seems to be taking a bit too long to get done. A year that started on a high, went all downhill with the outbreak of coronavirus. Locust attacks, frequent earthquakes, cyclones, floods, Amazon fires; you name it– 2020 has seen everything.

What were the memes that stayed with you? Tell us.

Editor’s note: This article is part of News18’s 25 Years of Internet In India series, where we capture how the state of mobile services, home broadband, internet services and content have evolved, particularly in the past few years. We try to understand what the internet means for us, be it for the new reality of work from home, for entertainment of the habit of ‘binge watching’, music streaming, online gaming and more.

Previous Analysis: The US-China fight began with trade. Now it’s the one thing still working for them
Next Eco-friendly Bikes to Madhubani Masks: How Coronavirus Forced These Indians to Be Jugaad ‘Self-Reliant’