Rashtriya Janata Dal’s Tejashwi Yadav, took to Facebook to share a video which he claimed was from the Nalanda Medical College and Hospital.

With Bihar Legislative Assembly Elections due in just a few more months, the stage has heated up in Bihar and many of the battle scenes are already being played out on social media. On Wednesday, Rashtriya Janata Dal’s Tejashwi Yadav, took to Facebook to share a video which he claimed was from the Nalanda Medical College and Hospital.

The video is meant to display the poor health and medical conditions inside the COVID ward of the state-run NMCH. “Look at the scary condition of Bihar,” Yadav said in a Facebook post while sharing the video. The RJD leader alleged that dead bodies of COVID-19 patients have been lying alongside beds containing patients who were alive for two days. “No doctors or nurses or ventilators insight,” Yadav claimed, adding that they had all been set to the CM’s office where he claimed 60 positive cases of coronavirus have been found. 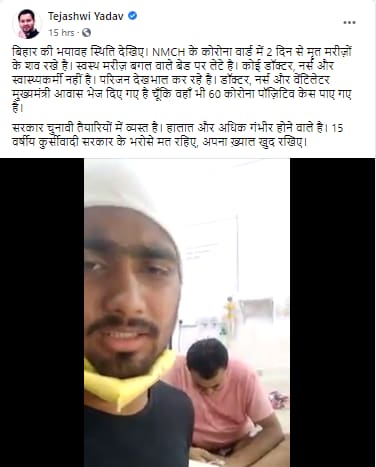 “The government is busy preparing for the elections,” Yadav said on Facebook. “The situation (regarding Covid-19) is set to get tougher,” he said, adding that people needed to start looking for alternatives to safeguard themselves instead of relying on the Janata Dal-United government under Chief Minister Nitish Kumar.

The video comes in the wake of a public apology tendered by Tejashwi in Patna recently in which he apologised for the misdeeds that took place during the reign of his parents Lalu Prasad and Rabri Devi. Yadav offered the apology to the people of Bihar in a meeting of party cadres in Patna recently. His gesture became more valuable politically since his statement appeared just before the assembly elections to be held this year.

Previous Watch: Video of Dog Staring Sadly at Owner for Not Sharing Food is Relatable
Next Starbucks will require customers to wear masks