How organizers plan to make the Olympics happen

Many have been outraging against the Delhi-based store’s racist depiction of Naga costumes | Image credit: Facebook

A garments store that sells clothing and costumes for wear in New Delhi has been facing flak for misrepresenting the culture of Nagaland by selling an animal-printed dress under the label of “tribal Naga costume”.

Named “Kaku Fancy Dress”, the store has been selling a leopard-printed top and skirt, made to look like the fur of the animal under the garb of “Naga traditional costume”.

The seller was using e-commerce platforms such as Flipkart to sell the offensively named product. The item was called out by a Facebook page called “Decolonial Indigenous Memes” which pointed out that obvious discriminatory tone of the post. 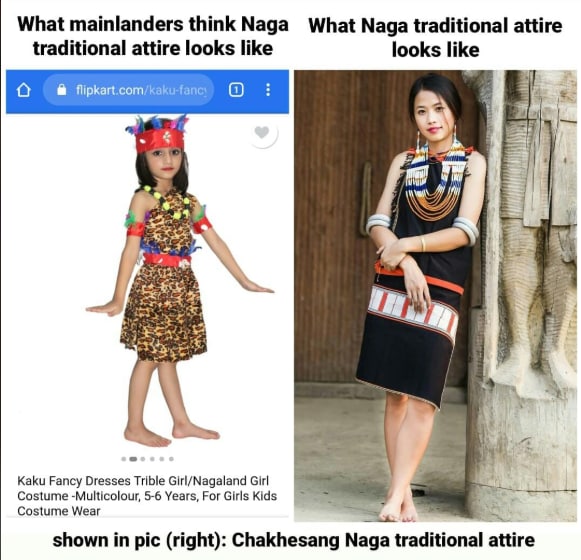 The page shared an image of the actual traditional costume worn by Naga women, as opposed to the animal-skin prints that many Brahmanical and upper-caste, as well as urban Indians, typically associate with tribal populations of India.

“Recently, it has come to our notice that certain sellers on Amazon, Flipkart and Snapdeal are selling grossly misrepresenting racist “costumes” as Northeastern traditional attire (Naga, in this case),” the page wrote while sharing the image.

“Our culture, our attires and our traditional symbols have already been reduced to a commodity which the mainland can exoticize,” the post further added. “Such false and offensive representations are nothing new, yet these go on unchecked in the mainstream. It is time for indigenous people to be assertive so we can stop this nonsense”.

Not just the leopard print dress, Kaku Fancy Dress was also found to be promoting and selling a variety of other inappropriate and inaccurate clothing under the name of Naga traditional wear including feathered headgears and exotic dresses.

Many from the North-Eastern state took to social media to call out the store’s racist portrayal of Nagas.

The post comes amid massive outrage in Nagaland regarding the ban on the sale of dog meat for consumption in the state.

Previous Japan Theme Park is Open after Lockdown, But With One Condition: No Screaming on Rollercoaster
Next Watch: Chimpanzee Turns into ‘Foster Mother’ and Feeds Milk to Cub from Feeding Bottle

With Covid-19 cases rising in Japan, citizens are questioning whether hosting such a major sporting …